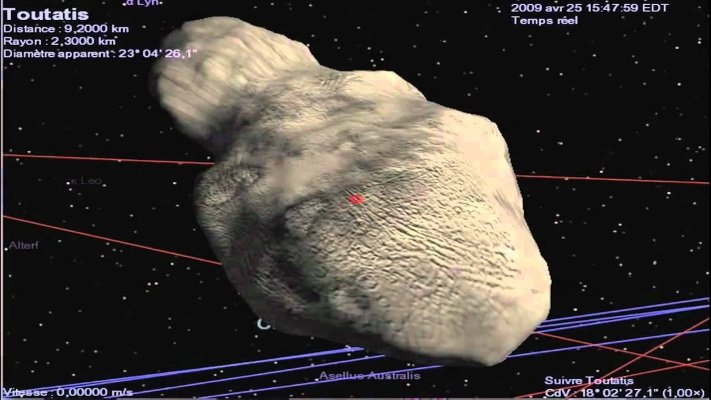 This same asteroid, or others similar to it, may threaten humanity someday. Astronomer Steven Ostro, a senior researcher at JPL, said it was the first clear look at one of the many thousands of asteroids that could interfere with Earth’s orbit. NASA bounced radar waves off the surface of Toutatis using a 230-foot antenna dish at a tracking station in the Mojave Desert. The returning signals were captured by a 112-foot antenna to record the photographs on December 8, 9, 10 and 13th.

Unlike most asteroids that orbit in the main asteroid belt between Mars and Jupiter, Toutatis and thousands of other errant wanderers could enter Earth’s atmosphere and strike the planet with devastating effects greater than the power of thousands of nuclear warheads. The images show Toutatis is composed of two jagged rocks, one about 2.5 miles wide; the other about 1.5 miles wide, apparently held together by gravitational forces.

Scientists believe a six to nine-mile wide asteroid struck Mexico’s Yucatan Peninsula about 65 million years ago, throwing dust and rocks high into the atmosphere, chilling the climate and destroying food plants, dinosaurs and most other highly evolved species. Scores of other impact areas have been discovered on Earth, including one from an asteroid that exploded over Siberia in 1908 obliterating a vast tract of forest. An asteroid two and one-half miles wide would wipe out millions of people, plants and animals whether it strikes a land mass or falls into the ocean. The tidal wave from a strike at sea in the Pacific Ocean, for instance, would probably sweep away every city on its shores, killing billions of people, and destroying livestock and crops hundreds of miles inland from the coast.