Nine Million Deaths In 2015 Because Of Pollution 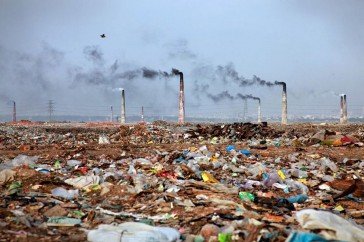 Pollution creates a deadly aftermath. In 2015, about one in six of the deaths around the world were linked to pollution of some kind, a new report has found.

“Pollution is much more than an environmental challenge. It is a profound and pervasive threat that affects many aspects of human health and wellbeing,” Philip Landrigan says in a statement. The new report emerged from a commission that he co-led for the medical journal The Lancet.

The commission spent two years compiling data from past reports of the World Health Organization and other scientific research bodies. They found that some nine million deaths in 2015 were connected to pollution, a killer that far surpassed deaths from malaria, tuberculosis and HIV/AIDS combined.

Air pollution causes respiratory problems and a range of other illnesses, including lung cancer, strokes and heart disease.

Though pollution-related deaths touched every part of the world, the report found an extreme geographic and economic imbalance. About 92 percent of the deaths of the study happened in low-income and industrializing countries, where environmental regulations are often lax or almost non-existent. Pollution, poverty, poor health, and social injustice are deeply intertwined.

Beyond a tragic human cost, the report’s authors also found that the economic burden placed on the world by pollution-related illness and death is high, approximately $4.6 trillion in total, or equivalent to just over 6 percent of the world’s gross domestic product.

But there are some good signs in the report.  Some types of pollution-related deaths, including household air and sanitation, are on the decline.