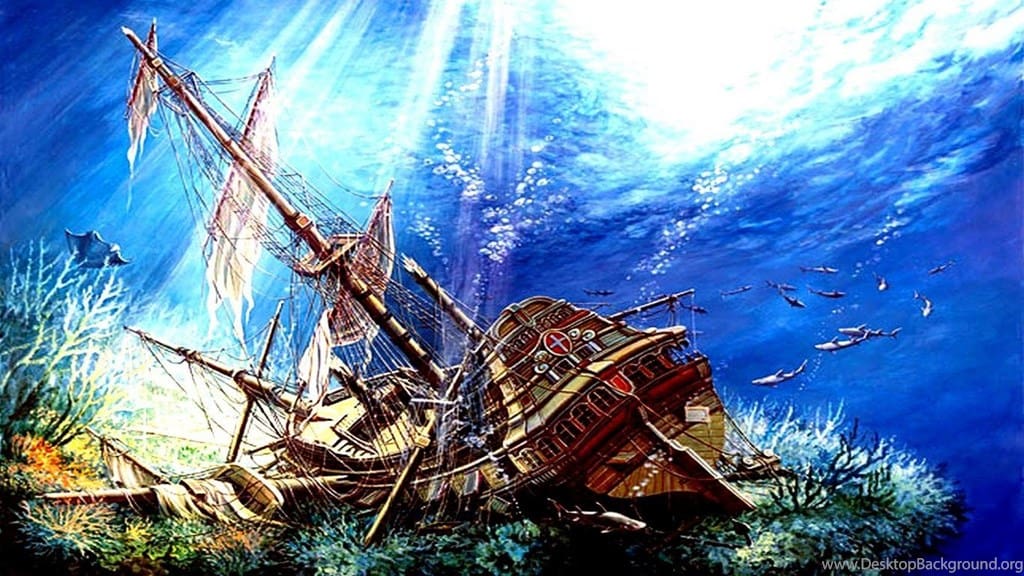 Mysterious shipwrecks. We are fascinated by shipwrecks, and it’s easy to see why. First, there’s the idea of sunken treasure, which has a pretty universal appeal in any culture that admires shiny things (all of them).

Then, there’s the uber-creepiness of seeing the remains of a great ship languishing at the bottom of the ocean, covered with algae and “rusticles,” a once-mighty vessel that’s now a home for crabs and fish. Finally, there’s the mystery. Ships sometimes sink, vanish, or are abandoned. When there are no survivors to tell the stories of these shipwrecks, eventually those lost ships become so mysterious and weird and creepy that they attain a sort of legendary status.

According to AMC, the HMS Terror was taken out by a giant supernatural polar bear or something, which is probably not true since according to AMC the whole world was also taken out by a virus that reanimates corpses and makes everyone have really greasy hair all the time.

If you just ignore the part where someone chose the stupidest name ever for this ship. (Terror was formerly a bomb ship, so perhaps the name once fit, but if you’re going to then go explore the Arctic maybe you should consider coming up with a less doomsy-sounding name, like the HMS Got Home Safely with Everyone On Board.) Anyway Terror was sailing with another former bomb vessel called HMS Erebus, which can mean “limbo between Earth and hell,” so same basic problem.

According to the Washington Post, both ships set sail in 1845 and never returned. The local Inuit said the ships became trapped in ice, and the starving men finally resorted to cannibalism. Still, no trace of either vessel was discovered until divers identified Erebus in 2014 and Terror in 2016.

The ship that rolled over and died

If you’ve never actually visited the Great Lakes, it might be hard to imagine that so many doomed ships could have sailed there. After all, lakes are not oceans, but rather places where you jet ski and drive around in overpriced speedboats blasting music no one else wants to listen to. The Great Lakes are not typical lakes, though. Lake Superior has a surface area of 31,700 square miles and is 1,333 feet at its deepest point. During a storm, waves on the Great Lakes can reach heights of more than 20 feet.

The SS Cyprus was an ore ship that sank on Lake Superior on October 11, 1907. According to The Shipwreck Museum, Cyprus was only 21 days old when it rolled over in a moderate gale and sank, leaving only one survivor. The cause of the wreck is still not known, but there are some tantalizing clues: The day before the ship was lost, a passing steamer noted it was leaving a red wake, which is something that might happen if water mixed with iron ore and then leaked out through a damaged hull.

In August 2007, Cyprus was discovered in 460 feet of water roughly 10 miles from where it was supposed to have sunk, but the wreck hasn’t really offered up much insight into its own demise. And that surviving crew member was no help, either — after the wreck he never spoke openly about the Cyprus again.

Not so victorious after all

The HMS Victory was only really briefly victorious — it was one of 17 ships returning to the U.K. after a triumphant 1744 mission against the French in Gibraltar and Lisbon. But then a storm came along and sent the Victory to the bottom of the English Channel.

The other 16 ships survived, but no one seemed to know the fate of the Victory. Some witnesses said it had been heard firing its guns in distress. Then pieces of wreckage started washing up on shore near Alderney.

That was bad news for the dude who ran the lighthouse because no one could imagine that a ship as mighty as the Victory could be lost unless it was someone’s fault. According to The Telegraph, the lighthouse keeper was accused of failing to keep the lights on, and then he was court-martialed and vilified and probably went to his grave with people spitting on his coffin. Finally, in 2008, Victory’s remains were found a full 60 miles west of Alderney, thus exonerating the lighthouse keeper more than 250 years too late.

So what did send the ship to the bottom of the sea? It could have been rotting timbers, or maybe the weight of 100 bronze cannons, or maybe the £128 million in Portuguese gold that was supposedly on board. If the ship is ever raised, we may get some answers. Or we may not. Sometimes the sea just doesn’t like to reveal its secrets.

Mutiny on the Outer Shoals

In 1921 the Carroll A. Deering sailed past the Cape Lookout Lightship, and a crewman told the keeper that the ship had lost its anchors. But there was a funny thing about the dude who passed along the message: He didn’t really look like an officer and he didn’t really act like one either, which left the lightship keeper with an odd feeling. The next day, the ship was seen by the SS Lake Elon. By the following day, it was aground and abandoned on the Outer Shoals. The sails were set, the lifeboats were missing, and there was food on the table as if the crew was just about to sit down for a meal.

This story even has a message in a bottle. According to the National Park Service, a note was discovered floating in a bottle that seemed to point to pirates as the culprit, but the note was later proven to be a hoax.

Interestingly, a lot of stuff was missing from the ship, and the report of the crew member who “didn’t act like an officer” has led some to speculate that the crew mutinied, ran the ship aground, and took everything of value. But since the Carroll A. Deering was scrapped shortly after the incident, no evidence remains that could ever confirm or deny that theory.

The ghost ship that sailed the Arctic for decades 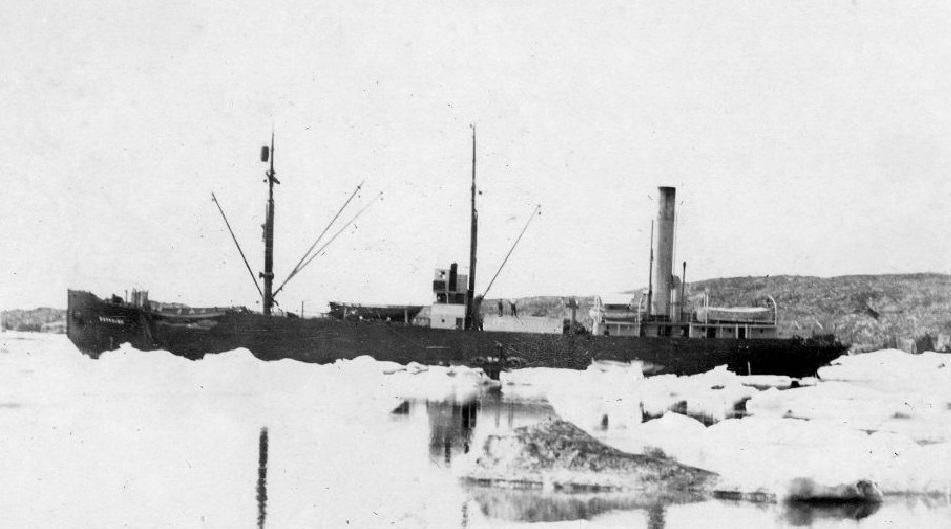 People have been seeing the Flying Dutchman since 1641, but it’s pretty doubtful that it ever had a real physical presence on the sea, at least not as a bona fide ghost ship. It was just a story, perpetuated by Frederick Marryat’s 1839 novel The Phantom Ship and popularized by Captain Jack Sparrow. Still, real ghost ships have existed, though most of them, like the Carroll A. Deering and the Mary Celeste are eventually boarded, hauled off, and either scrapped or refitted.

In October 1931, the Baychimo was near Barrow, Alaska, when it became trapped in the ice during a storm. In those modern days being stranded in ice wasn’t as harrowing as in earlier days — thankfully, no one was eaten by a demon polar bear and no one had to resort to cannibalism. Instead, Historic Mysteries says half the crew was airlifted away while the other half decided to wait out the bad weather. Then a blizzard blew in, and the ship vanished.

But that wasn’t the end of the Baychimo. A few days later, the ship was seen drifting 50 miles south of Barrow. The crew managed to retrieve its cargo, but it looked like it was destined to sink, so they abandoned it. But Baychimo didn’t sink, not for at least another 38 years. The ship was repeatedly seen drifting until 1969, when most people think it finally succumbed to the elements.

And you thought pirates only existed in Disney movies 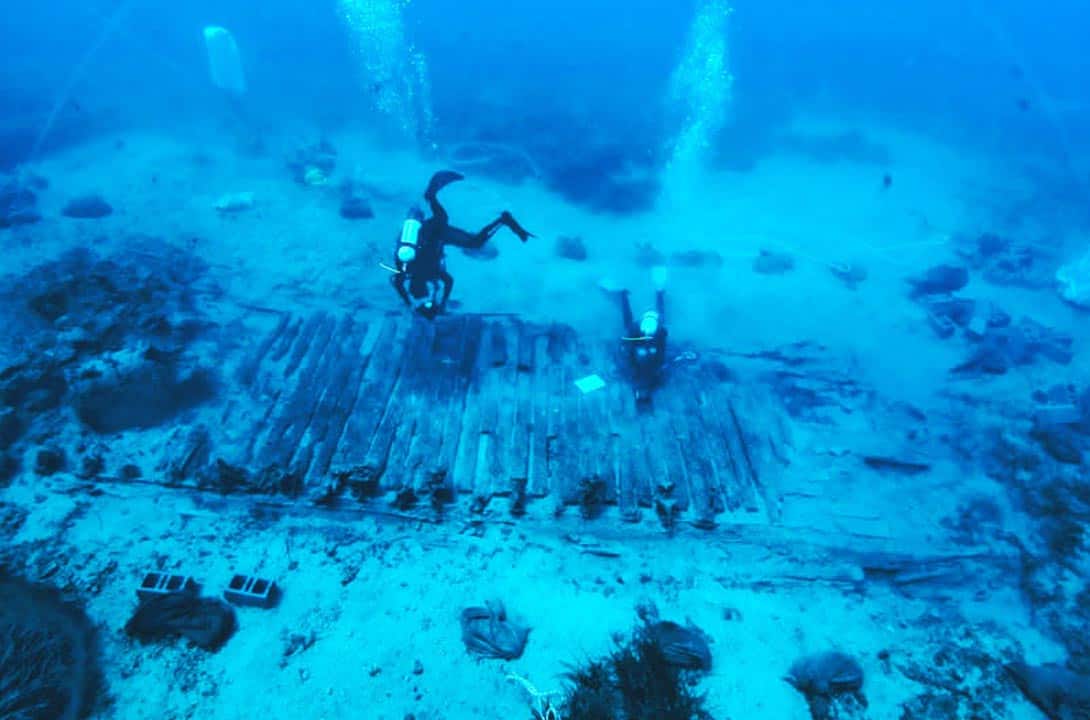 No list of shipwrecks can be complete without sunken treasure. In 2007 a treasure hunting outfit with the very misleadingly science-y name “Odyssey Marine Exploration” announced it had recovered 17 tons of gold and silver from a sunken wreck off the coast of Cornwall.

Odyssey refused to publicly speculate on exactly which shipwreck they were plundering — instead, they code-named the find the Black Swan. According to The Guardian, though, a squabble with the Spanish government the following year seemed to suggest the ship was a Spanish galleon, possibly the Nuestra Senora de las Mercedes, which was full of Peruvian treasure when it went down in 1804.

When Peru got wind of this, it decided the loot actually belonged within its borders because the coins were all minted from metal stolen by the Spaniards. And then Odyssey claimed the treasure, and Spain claimed the treasure, and marine archaeologists grumbled that it all really ought to go in a museum. By 2012 the issue was finally settled in Spain’s favor, though Odyssey continued to argue that they just couldn’t be sure the ship was really the Mercedes, so that meant they were the rightful owners. Unfortunately for Odyssey, most of the coins are now in Spanish museums, so victory goes to the marine archaeologists.