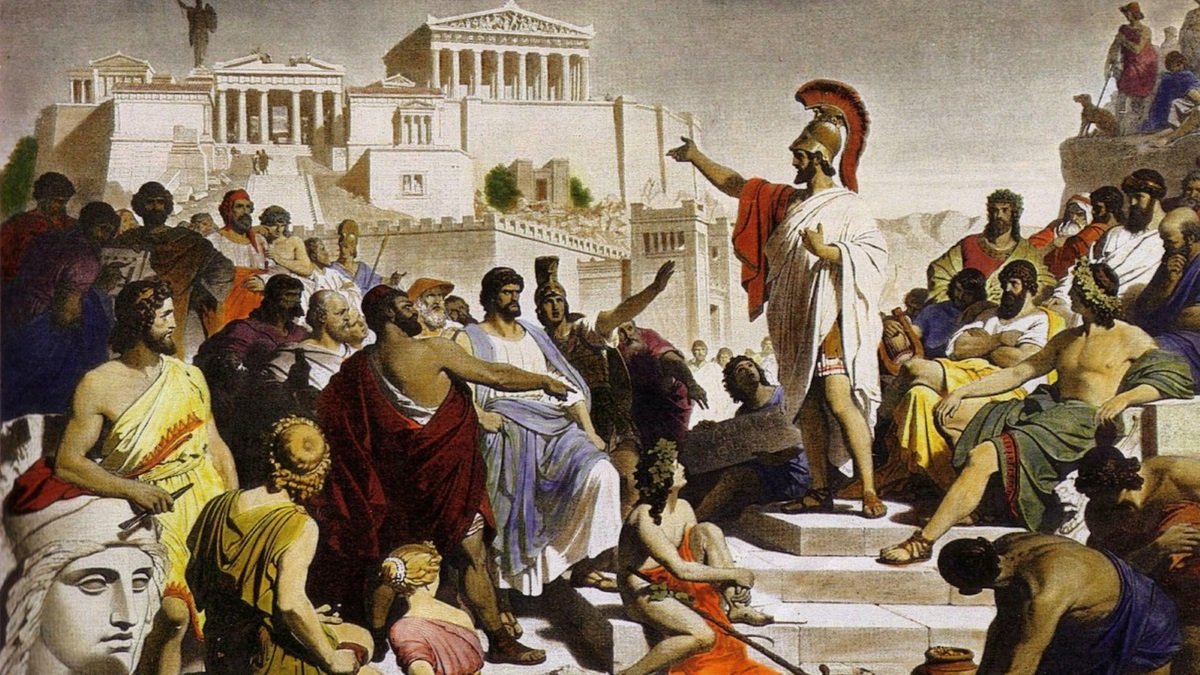 (recommend audio) The Athenian Revolution (508–507 BCE) was a revolt by the people of Athens that overthrew the ruling aristocratic oligarchy,  establishing the almost century-long self-governance of Athens in the form of a participatory democracy – open to all free male citizens. It was a reaction to a broader trend of tyranny that had swept through Athens and the rest of Greece at the time.

According to legend, Athens was formerly ruled by kings, a situation which may have continued up until the 9th century BCE. During this period, Athens succeeded in bringing the other towns of Attica under its rule. This process of synoikismos – the bringing together into one home – created the largest and wealthiest state on the Greek mainland, but it also created a larger class of people excluded from political life by the nobility.

By the 7th century BCE, social unrest had become widespread, as Athens suffered a land and agrarian crisis. Many Greek city-states had seen the emergence of tyrants and opportunistic noblemen who had taken power on behalf of sectional interests. In Megara, Theagenes had come to power as an enemy of the local oligarchs.

His son-in-law, an Athenian nobleman named Cylon, himself made an unsuccessful attempt to seize power in Athens in 632 BCE. However, the coup was opposed by the people of Athens, who forced Cylon and his supporters to take refuge in Athena‘s temple on the Acropolis. Cylon and his brother escaped, but his followers were cornered by Athens’ nine archons (the chief city officials) and stoned to death.

In 594 BCE, Solon, premier archon at the time, issued reforms that defined citizenship in a way that gave each free resident of Attica a political function: Athenian citizens had the right to participate in assembly meetings. By granting the formerly aristocratic role to every free citizen of Athens who owned property, Solon reshaped the social framework of the city-state. Under these reforms, a council of 400 members (with 100 citizens from each of Athens’s four tribes) called the boule ran daily affairs and set the political agenda.

Democracy however was threatened by tyranny, as several political factions began to vie for control of the Athenian polis. Peisistratos launched a populist coup and seized the reigns of government in Athens, declaring himself Tyrant. Upon his death, Peisistratos was succeeded to the tyranny by his sons Hippias and Hipparchus, the latter of which was murdered by the tyrannicides Harmodius and Aristogeiton.

Hippias executed the tyrannicides and it was said that he became a bitter and cruel ruler, executing a large number of citizens and imposing harsh taxes on the Athenian populace. Hippias’s cruelty soon created unrest among his subjects. As he began losing control, he sought military support from the Persians and formed alliances with other Greek tyrannies.

The Alcmaeonidae family of Athens, which Peisistratus had exiled in 546 BCE, was concerned about Hippias forming alliances with the Persian ruling class, and began planning an invasion to depose him.

In 510 BCE Cleomenes I of Sparta successfully invaded Athens and trapped Hippias on the Acropolis.They also took the Pisistratidae children hostage forcing Hippias to leave Athens in order to have them returned safely. Hippias was one of several Greek aristocrats who took refuge in the Achaemenid Empire following reversals at home. 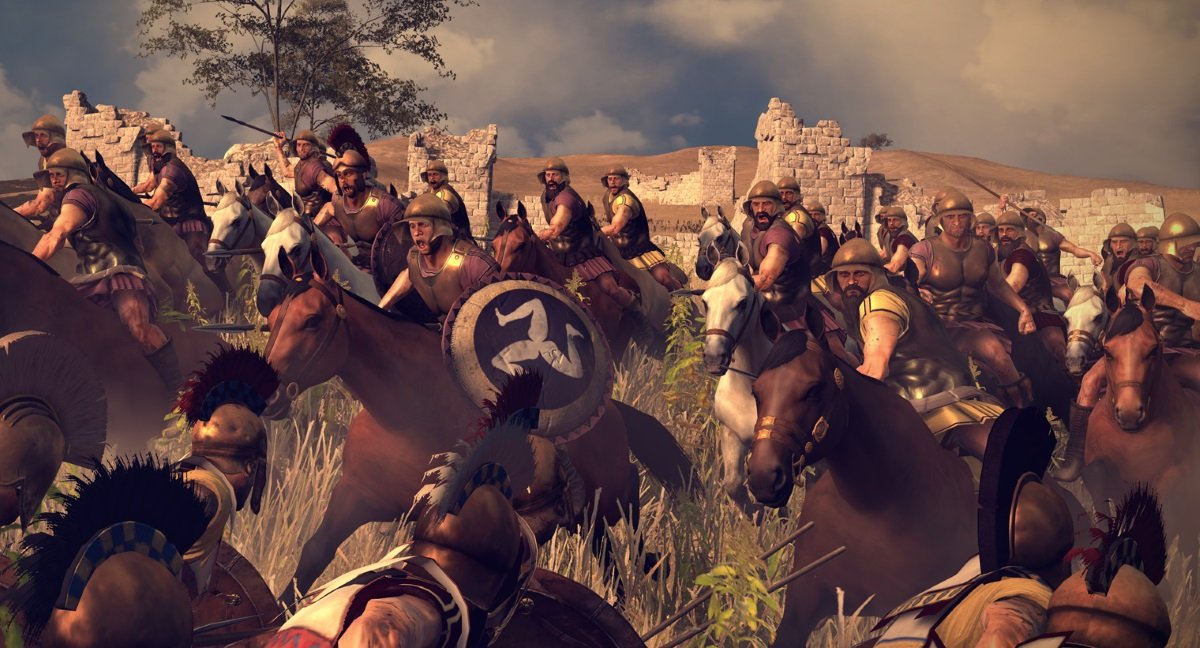 With the tyrant ousted, the Spartan king installed Isagoras at the head of an oligarchy, made up of Athenian aristocrats that were loyal or sympathetic to Sparta. He found himself opposed by the majority of Athens, particularly the middle and lower classes, who desired a return to democracy. Cleisthenes, of the pro-democracy Alcmaeonidae clan, was expelled from Athens by the Spartan-backed oligarchs, leaving Isagoras unrivalled in power within the city.

Isagoras set about dispossessing hundreds of Athenians of their homes and exiling them on the pretext that they too were cursed by the Alcmaeonidae miasma, he also attempted to dissolve the Boule. However, the council resisted, and the Athenian people declared their support for the council and revolted against the oligarchy.

Cleomenes, Isagoras and their supporters were forced by regular citizens to flee to the Acropolis, where they were besieged by Athens’ populace for two days. On the third day the Athenians made a truce, allowed Cleomenes and Isagoras to escape, but executed 300 of Isagoras’ supporters. Cleisthenes was subsequently recalled, along with hundreds of exiles, and he was elected the first archon of a democratic Athens.

Cleisthenes began to institutionalize the democratic revolution. In order to forestall strife between the traditional clans, which had led to the tyranny in the first place, he changed the political organization from the four traditional tribes, which were based on family relations and which formed the basis of the upper class Athenian political power network, into ten tribes according to their area of residence (their deme,) which would form the basis of a new democratic power structure. 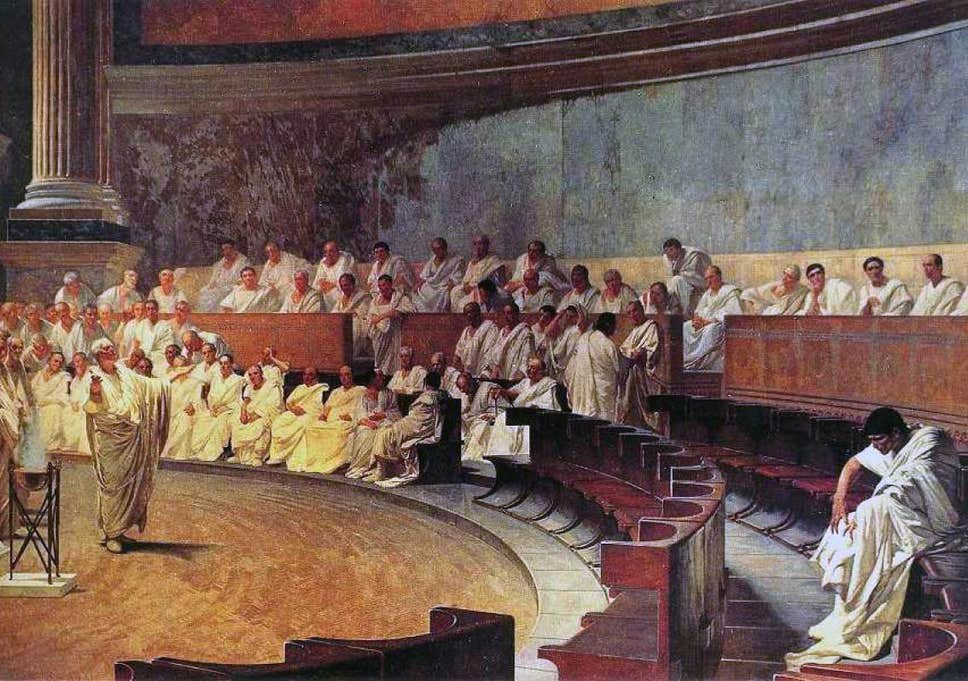 Cleisthenes also abolished patronymics in favour of demonymics (a name given according to the deme to which one belongs), thus increasing Athenians’ sense of belonging to their local community, thus completely undermining the rule of aristocratic families.

He also established sortition – the random selection of citizens to fill government positions rather than kinship or heredity. He also introduced the bouletic oath, “To advise according to the laws what was best for the people”.

The court system and the Boule were also reorganized and expanded. It was now the role of the Boule to propose laws to the assembly of voters, who convened in Athens around forty times a year for this purpose. The bills proposed could be rejected, passed or returned for amendments by the assembly.

Cleisthenes also may have introduced ostracism (first used in 487 BCE), whereby a vote by a plurality of citizens would exile a citizen for 10 years. The initial trend was to vote for a citizen deemed a threat to the democracy (e.g., by having ambitions to set himself up as tyrant). However, soon after, any citizen judged to have too much power in the city tended to be targeted for exile.

Under this system, the exiled man’s property was maintained, but he was not physically in the city where he could possibly create a new tyranny. One later ancient author records that Cleisthenes himself was the first person to be ostracized.