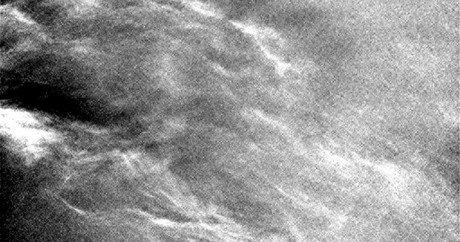 The clouds on Mars resemble the thin ice-crystal cirrus clouds found in Earth’s atmosphere. The images, taken by the rover’s Navigation Camera (Navcam) on July 17, offer the best view yet of such clouds captured by Curiosity. “It is likely that the clouds are composed of crystals of water ice that condense out onto dust grains where it is cold in the atmosphere,” John Moores, a Curiosity science-team member from York University in Toronto, said in a statement from NASA. “The wisps are created as those crystals fall and evaporate in patterns known as ‘fall streaks’ or ‘mare’s tails.’ While the rover does not have a way to ascertain the altitude of these clouds, on Earth such clouds form at high altitude.”

Similar cloud patterns have been observed before by Curiosity and other missions to the Martian surface, such as NASA’s Phoenix Mars Lander in 2008, which surveyed higher latitudes of the Martian arctic. However, the recent observations represent Curiosity’s clearest view of the wispy clouds from the rover’s vantage point of about 5 degrees south of the equator, according to the statement.

Temperatures vary more on Mars than they do on Earth due to the Red Planet’s elliptical orbit around the sun. Previously, a belt of ice-crystal clouds has been seen near the equator when Mars was at its most distant point from the sun, also known as aphelion.

The new images of the clouds — called the “aphelion cloud belt” — were taken about two months before the planet’s farthest point in orbit. In addition, the clouds were only seen in the early morning and had disappeared by midday. Therefore, researchers suggest the morning clouds spotted by Curiosity could be an early stage of the aphelion cloud belt, according to the statement.

Using the rover’s Navcam, researchers captured two sets of eight images of the clouds. The rover’s camera was pointed nearly straight up for one set and then just above the southern horizon for the other set. The series of images, taken over a span of 4 minutes in the early morning, were later processed to create an animation of the clouds’ movement across the Martian sky. Cloud movement was observed in each set, but dissipated by midday.