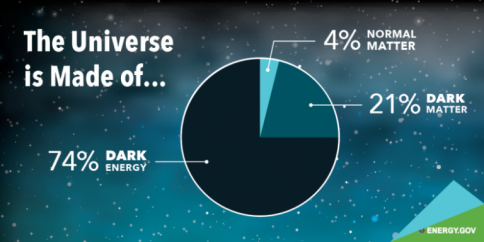 Dark Matter. We know, pretty simply, how stars work. We know how much light they give off, and that’s very closely related to their mass. Brighter stars are more massive; dimmer stars are less so.

So when we look at an entire galaxy, what we’re really measuring is all of the light coming from the stars in it. We know, therefore, how to tell how much mass is present in the stars in a galaxy, or in a cluster of galaxies, or in any astronomical object we look at.

But we have a different way of measuring mass as well: we know how gravity works.

So we can watch how galaxies rotate, or we can look at gravitational lensing, and we can measure how much mass is there from gravity. This way, we know how much total mass there is, and we can see how much of it is from stars.

However, the problem is that the numbers don’t match up. In fact, what we find is that 98% of the mass is not in stars. Not only is it not in stars, but of that 98%, only about 13% is made up of protons, neutrons, and electrons; we have very little idea what the remaining 85% of the stuff in our galaxy is. So we give it a name, dark matter, since it has mass, and exerts a gravitational force, but doesn’t give off light or interact through any of the other forces. And figuring out what dark matter is will be a nobel-prize-worthy discovery, if we can detect it.

We know from observations that all galaxies have a dark matter halo surrounding them; what we don’t know is whether the halo is smooth, or whether there are clumps of dark matter in them. When we do numerical simulations, though, as well as calculations of different models, we find that they all wind up with clumps in them, like so:

There’s a neat trick we can use to see whether there are these dark matter clumps in our galaxy. When you look out at anything, the light travels to your eye in a straight line. But if there’s something with mass in the way, the mass will bend the light around it according to Einstein’s theory of General Relativity. If the mass is close to the line-of-sight, the bending is more severe; if the mass is far away, the bending is very slight, and the actual position lines up very well with the apparent position, like so:

These theoretical dark matter clumps are too light and too diffuse to cause a visible effect in starlight. But, there are special stars that emit radio light at such high precision that they could see the difference between a dark matter clump being close to it and one being farther away. These stars are called pulsars, and they are so well-measured that the best and fastest of them rotate nearly 1000 times per second (and remember, these are stars weighing as much as the Sun does), and have their periods known to within 10-18 seconds!

So, if we have dark matter clumps in our galaxy, watching pulsars could allow us to find them, since the pulse timing will change as the dark matter clumps move through the galaxy. Right now, the odds aren’t very good because we don’t have enough pulsars, and our radio telescopes aren’t good enough. But if they build the Square Kilometer Array, the odds improve tremendously, so much so that we should detect dark matter clumps if they exist using pulsar timing! If we don’t see them, it means that these halos aren’t nearly as clumpy as we think they should be — either way, this would be the first chance we have to learn anything about the dark matter in our own galaxy!

Also, FYI, every week (or so) many of the space-related blogs get together and share their best posts. It’s called the Carnival of Space, and this week my post on visualizing the Milky Way is on it!