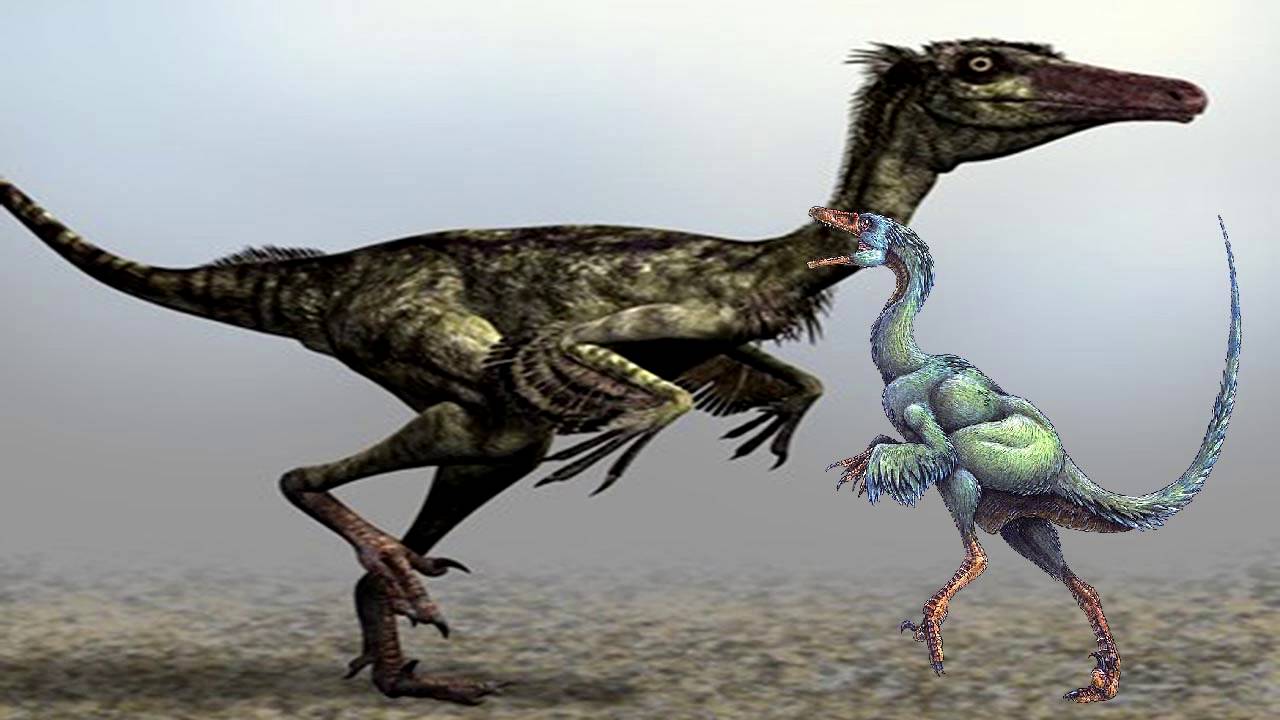 Stenonychosaurus has been credited with being the most intelligent dinosaur.

Compared with most others, it had a relatively large brain, although the excess brain volume was probably not concerned with reasoning and other activities that could be called “intelligence.”

Stenonychosaurus had large eyes, slender flexible fingers, and a light body. The brain was probably concerned mainly with its highly developed senses, fine control of its limbs, and fast reflexes, which were used in hunting small and elusive prey.

In 1982 Dale Russell and R. S_guin (Ottawa) published an article on Stenonychosaurus. A new partial skeleton had been discovered in 1967 which provided the basis of the first skeletal and flesh restoration of Stenonychosaurus. The detailed work of building the model was illustrated in their paper.

In addition to the restoration, they indulged in an imaginative experiment, posing a question: What might these intelligent dinosaurs have evolved into had they not become extinct near the end of the Cretaceous period about 64 million years ago?

Stenonychosaurus proved to be an interesting choice for the experiment because it was one of the largest-brained and therefore presumably one of the most intelligent of all dinosaurs. The result of the experiment was a creature named “dinosauroid.”

One interpretation of the habits of Stenonychosaurus is that they were lightly built active hunters of small prey_perhaps small lizards and mammals. The long grasping hands, and the large eyes which pointed partly forward and therefore gave reasonably stereoscopic vision, may indicate that these were nimble predators which were active at dusk or even at night when many small nocturnal mammals would have been active.

Dinosauroid was constructed by extrapolating from these attributes. It was visualized as a highly intelligent and manipulative dinosaur. What it might have lacked in speed, it would have made up for by its superior intellect. This would have allowed it to avoid potential predators by outwitting them rather than by running away.

As a predator it may have been able to catch prey both by endurance running and perhaps by making simple weapons_ much as primitive homo sapiens would do 64 million years later.

But let’s take the evolution of the Saurian a step further. Let’s say, for the sake of argument, that Stenonychosaurus did not become extinct at the end of the Cretaceous period and actually had a chance to evolve into something close to the Russell-S_guin model.

It is remarkable to note that the Saurian creature bears a striking resemblance to descriptions given by witnesses during a number of UFO encounters! Long, clawlike fingers, large, elongated eyes, reptilian nostrils, three-toed, clawed feet, lizard-like skin, small stature and absence of ears are all features people have reported as belonging to UFO occupants.

Scientists do not know why most dinosaurs became extinct; they assume it because few relatives exist today in forms recognizable as dinosaurs.

But what if one or two examples actually survived and managed to evolve into highly intelligent creatures capable of building not only simple weapons, but sophisticated craft to explore the cosmos?

The Sauroids would have a 64 million year head start on homo sapiens. They could have built their empires and space craft and disappeared among the stars millions of years before humans ever evolved to walk upon this planet!

Or if the Saurians are not from planet Earth, why not from another where evolution might have followed a similar pattern with similar, if not identical, creatures, including dinosaurs, at about the same cosmic time_50 to 70 million years ago?

We Can’t Rule Out

Let’s face it: When we finally arrive on some distant planet inhabited by sentient beings, whether more or less intelligent than ourselves, scientists and intelligence agencies are going to insist that specimens be returned to Earth, dead or alive, for study. Knowing this, should we be surprised or outraged if creatures from other worlds arrive here and begin taking specimens of earthlings for their own scientific studies?

The requirement for the complete and successful examination of any living organism is to reduce it to its smallest parts and look at each cell or atom under a powerful electron microscope or vaporize small samples in a spectrometer to determine the elements of which the creature was comprised when it was alive. Sample parts might suffice for some studies but whole creatures, alive and dead, will be required for others.

These sample creatures will be acquired for study by abduction and murder. Period. Those in government agencies whose business it is to plan and coordinate these missions have known it all along. It is possible that they are practicing and honing their skills by abducting and dissecting their fellow humans from time to time. At the same time, they may be building their own secret parts bank for the generations of space travelers who will need spare kidneys, livers, eyes, hearts and lungs on Mars about three decades hence.

Another thought is that the creatures who crew UFOs might not be from another planet, but might have been genetically built and incubated right here on earth in one of those secret underground laboratories, and not by aliens, but by human tinkerers. Suppose the future astronaut is not a warm-blooded mammal (human), but a cold-blooded intelligent reptile (saurian) who can tolerate cosmic radiation better than humans and who have shown to be able to survive mass extinctions with little change or effect in their subsequent behavior and evolution.

Suppose the saurian is not a creature who lived before us, but is the creature, by genetic manipulation, some of us are soon to become.

Some reptiles, remember, have an uncanny ability to regenerate lost parts, often two or three parts. This would prove a real benefit for explorers on a planet several million miles from home base where spare arms and legs are not readily available.

Some reptiles can survive days or even weeks between meals while warm-blooded mammals can hardly exist more than a few hours!

Some reptiles appear to be unaffected by cosmic radiation that is killing human beings by the thousands. Some reptiles can hibernate for months and years at a time without suffering adverse effects.

Have witnesses seen this creature in one of its evolved forms? Is this what contemporary Stenonychosaurus might have looked like had it continued to evolve to the present day? Russell and S_guin assumed for it a large brain, and the short neck and upright posture were arrived at as a way of balancing the head more efficiently. In turn, the vertical posture removed the need for a tail. The legs were modified by lowering the ankle to the ground and the foot was lengthened. It would have stood upright at about five feet tall. Given the proper conditions and time, this evolution would be quite possible.