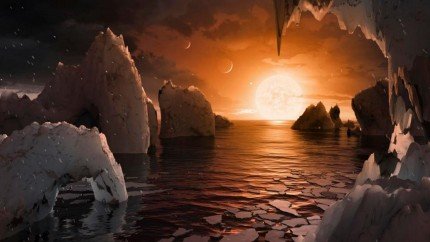 Did the aliens accidentally kill themselves? With at least 100 billion planets in the Milky Way, you’d think at least one would have produced a race of intelligent alien beings. So how come we’ve never seen signs of space aliens even after decades of SETI (search for extraterrestrial intelligence) research?

Scientists have long puzzled over that simple question. Now, one of England’s best-known physicists, Professor Brian Cox of Manchester University, has weighed in with an answer. And it’s rather bleak. As reported by The Times, Cox maintains that alien civilizations might snuff themselves out not long after they come to be ― done in by nuclear war, runaway climate change or other threats that rise as their technological sophistication advances. “It may be that the growth of science and engineering inevitably outstrips the development of political expertise, leading to disaster,” he said.

In other words, we haven’t seen signs of extraterrestrial life because alien civilizations that did exist are now gone ― and, presumably, alien civilizations that might exist now are too primitive technologically to have made their presence known to us. Bummer. Life as we know it first became possible some 30 million years after the Big Bang, which occurred about 14 billion years ago, according to the release. Before then, the raw materials for life, including carbon and oxygen, simply didn’t exist.

And life should be possible in the universe for another 10 trillion years, when astronomers predict the last stars will grow cold. That leaves a lot of time for alien life to evolve. Maybe that’s cold comfort, especially given another of Cox’s contentions: that our own nuke-owning, climate-changing civilization may be headed for extinction. ”We could be approaching that position,” he said, according to the Times. Fingers crossed!