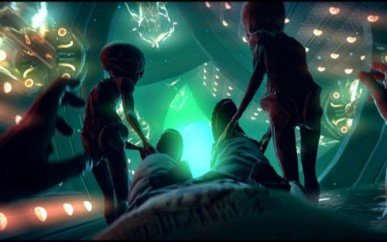 Thousands of ordinary people claim to have had contact with aliens from other worlds.

Response to these claims varies from skeptics who make every effort to ridicule the phenomena to true believers who accept it at face value and believe the authorities know more than they are willing to admit.

There are notable similarities between reports of abductions and accounts of nightmares. The order in which events are remembered, the manner in which they occur without apparent cause or context, are typically like the dream state.

These dramatic events seem to have little if any effect upon the physical world beyond the person who has experienced them.

People who claim to have been abducted are worried by loss of time, vague memories, feelings of being trapped or restrained on a table, and unusual and unknown sounds from the darkness.

They become irritable, often unable to concentrate, suffer loss of short-term memory and forget the simplest things such as numbers, names and dates.

Some begin to have recurring dreams from the years of their adolescence. Others claim to hear voices and odd sounds, apparently real and nearby, issuing from beings or objects not visible to the five senses.

Most disturbing of all, actual marks and scars have been found on the skin of some who believe they have been physically examined by aliens.

A number of people have awakened to find painful bruises on the fleshy portion of their noses.

These bruises, while tender and annoying, may leave no marks and vanish in a day or two.

Sometimes a red spot with a small dark puncture wound will appear in the center of the bruise, suggesting the bruise may have been caused by a hypodermic needle or similar instrument during an examination of which the person is consciously unaware.

Many of these people feel separated from the rest of society by the very strangeness of the experience and by negative emotions of which they are reluctant to speak: anxiety about the next abduction or examination; worry about the medical problems that might occur as a result of having been examined in an alien environment, and real fear for the future for themselves, their families and humankind at large.

Despite the great distances between groups who believe they have been abducted or who believe abductions are occurring, the barriers separating them from the rest of us have made the abduction phenomena an international social movement.

Topics of discussion or interest include: how to avoid future abductions; how to discuss the subject with children, especially if they, too, are having abduction experiences, and how to cope with the problems they have in acknowledging their abductee status to family and friends without being characterized as odd or actually insane.

The suggestion that accounts of abductions are hoaxes concocted for fame and profit can be generally dismissed since few abductees seek publicity or invite the media to share their anguished memories, knowing they are more likely to meet with ridicule than offers of money and fame.

Additionally, the claim that most, if not all, the abductees are of doubtful sanity can also be generally dismissed since the preponderance of psychiatric evidence to date does not support such views.

To begin an investigation of any event, particularly an unusual non-repeatable event such as the sighting of UFOs, we must remember that, lacking photographic evidence, we will be dealing with only the memory of the event as perceived through conventional senses.

Abductions, particularly if perceived only in some unconscious portion of the mind, are even more difficult to investigate since the abductee cannot provide any evidence or details to support the claim.

Claims of abduction fall into three categories: 1) Hoaxes. The abduction did not occur; 2) True abduction.

One can only wonder if these hoaxes are not being perpetrated by those who wish to discredit the pro-UFO groups.

True alien abductions are generally revealed by hypnosis or psychiatric examination, although a number of victims are able to remember at least portions of the abduction on a conscious level.

These memories may include incisions, cell sampling, gynecological or fetal interference, interbreeding and other traumatic events.

Often these people may recall events of abduction beginning as far back as early childhood.

Recurring dreams during adolescence and into early adulthood, particularly if of “monsters” and suffocating, or of being restrained or stabbed, or of walking or floating aimlessly through large, old, empty houses, while not proof, may provide clues to abductions.

Imagined abductions, where the victim believes he or she has been abducted but has no physical scars or specific details and cannot produce evidence that they were absent from their home or city for a length of time, are puzzling but, if sincerely claimed, should be treated with respect and given the same treatment as a real abduction.

These types of “abductions” might actually be telepathic contact, precognitive episodes or out-of-body experiences induced or initiated by 1) aliens, or 2) foreign or domestic intelligence agencies. In other words, ideas, scenes and sounds may have been implanted in the victim’s mind during telepathic contact so they afterwards believe they were abducted, taken aboard an alien spaceship and examined or interbred.

One clue to alien abduction and medical examination may be gleaned from experiments conducted prior to and after the Challenger disaster.

It was discovered that certain fertilized chicken eggs did not develop in space and that others produced healthy chicks with slight vertigo problems that left them unable to balance during roost.

Could it be that the aliens, having spent a great deal of time in space, are no longer able to produce fertilized eggs or that space born alien children are being born with serious handicaps?

Could it be that they now require eggs fertilized in Earth’s gravity by Earth women in order to produce children capable of surviving in space?

And could the telepathic contact episodes be experiments to discover which of us is most sensitive to communion of the minds?

Could it be a selection process by intelligence agencies to find future telepathic cosmonauts among your children and grandchildren who may carry the same inherent abilities?

While there is no proof for the theory, it is possible that abductions and telepathic contacts may be executed by aliens and intelligence agencies either jointly or separately for widely different reasons.

Because the distances traveled may be great and the time spent on the journey long, they may also need spare parts and spare genes or sperm and eggs ready to incubate at the appropriate time.

If fertilization in space is risky or even impossible, second generations of pilot and crew will have to be prepared before the ship leaves Earth; that is, seeds stored in containers for future incubation.

If human eggs can only be fertilized in space on, say, a 50/50 basis (50% abortion rate), future female cosmonauts would be kept busy on the nest and have little time for anything else if they were expected to produce the succeeding crew!

While no criteria has been established for the study of telepathic contact, there is sufficient evidence to suggest that something or someone is conducting such experiments upon human subjects.

These contacts are even more bizarre and difficult to prove than sightings, physical contact or abductions for the reasons stated earlier: there simply is no physical evidence.

Yet the problem, which occurs totally within the human mind, is real and is apparently growing or evolving into the next phase of the UFO phenomena.

This insidious invasion of the subconscious mind may herald the beginning of mass landings of alien craft, the final step in the conquest of planet Earth.

If telepathic contact is being conducted by some intelligence agency rather than by aliens, it seems to pose an even more frightening threat because we are left with the mystery of discovering their intentions for doing so.

People who have experienced this telepathic contact generally do not attribute the phenomena to aliens from other worlds; they almost universally claim they are being scanned by some agency within our own government!

Most notable is a periodic loss of short term memory (hours or a day) during which periods they are unable to recall telephone numbers, dates, addresses or even names of their closest friends.

This suggests that the telepathic contact continues on a kind of “holding pattern”, passively rather than actively engaging the victim.

On the other hand, the contactee may be so distracted by the frightening events that they are unable to resume normal thinking functions of the brain until several hours have passed even though the contact may have been discontinued.

If this relatively new and undisclosed type of contact is part of the modern “UFO phenomena”, it may be very far removed from the mystery with which we began some 50 years ago!