Missing Cat. Clive, a Norwegian Forest cat, disappeared from his home in December 2014 and left his owners Tanya and Jonathan Irons devastated. 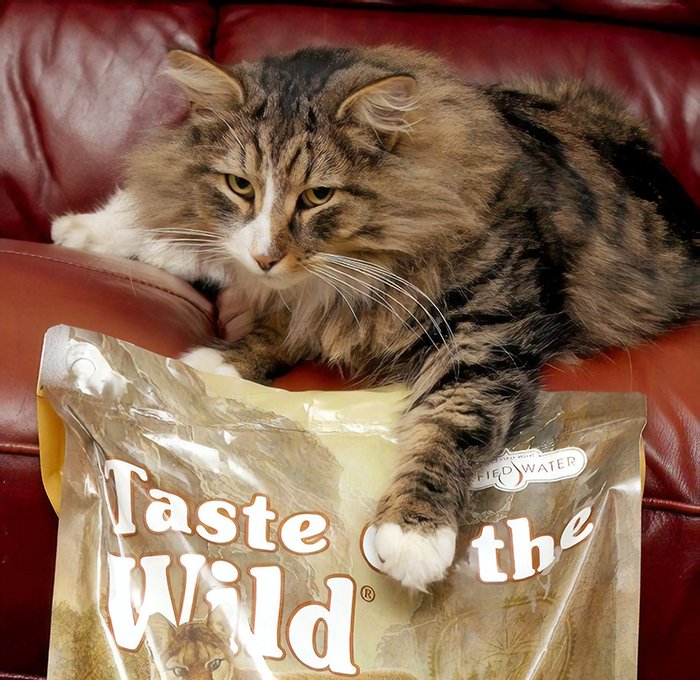 The couple launched an appeal on Facebook and put up posters around their neighborhood but unfortunately, to no avail. Tanya later said: “He liked to go outside a lot. We thought somebody must have taken him in as he’s so adorable.”

As it turned out, nobody took Clive in – he was actually having the time of his life. Clive was found after the staff of one pet food factory noticed that the cat food had been going missing and decided to trap the burglar. They left a trail of cat treats which lead to a basket suspended over a pressure pad, which would cause it to drop leaving the suspect inside. One morning, after the staff came in, they saw that the trap worked. Workers took Clive to a vet who scanned his microchip, revealing that he was registered to the Irons family, who were living just two miles away from the pet food factory.

Retail director of the company, Colin Lewis, added: “It’s amazing. The warehouse is 20 thousand square foot of pet food. I think there’s been a few holes in some of the boxes. It was a team effort to get the cat, I think everyone had a go over the week before Diane found him. We got the trap from a cat rescue center. It’s a cage – you put some food in it, then when the cat goes in there’s a pressure pad that shuts the door behind it. Clive only ate cat food in the factory, I think he thought he was living in a penthouse.”

Finally, the family have reunited with Clive – only to realize that their beloved cat ballooned to almost twice his original size!

Tanya, Clive’s owner said: “Clive was nine months old and a lot smaller when we lost him. We were shocked to see how big and fluffy he was when we got him back. He’s obviously been living the life of Riley in that pet food factory. He definitely recognises us, he’s just fatter now.”

“I think he’s been enjoying himself feasting for the past year. He’s wasn’t a big eater before, but he always had to eat very quickly before his brothers stole it. He was probably glad he didn’t have to compete with them to eat for once. He has a huge appetite now though. I’ve had to leave him with a big bucket of food because he just won’t stop eating. We’re not going to put him on a diet though, he’s just a bit rounder but he’s happy.”