The world is pretty awesome. Even in our modern age, it’s full of hidden secrets like entire underground cities, and it’s also full of some seriously desolate, brutal terrain that we haven’t tamed yet.

And it turns out there’s also places where the world has swallowed some amazing – and strange – things completely, but thanks to global warming, we’re rediscovering a lot of those things. Some are better left buried. 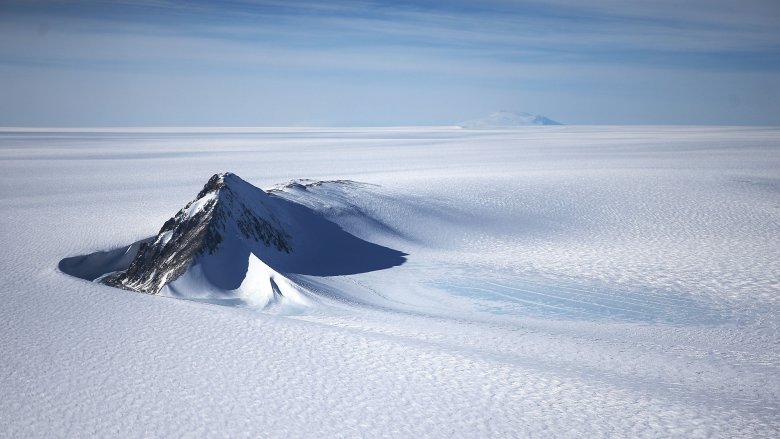 Look at the ice sheets that cover much of Antarctica and you might assume Antarctica is pretty cold, pretty boring, and (above all) flat. But buried beneath that boring ice is a mountain range.

Scientists have known about the Gamburtsev Mountains for around 50 years. Since the range is buried under about a mile of ice, it’s not surprising we don’t know too much about it.

According to LiveScience, it’s only recently that advances in imaging technology have allowed us to get a peek under the ice, and imagine the surprise when scientists found a series of mountains with peaks up to 10,000 feet high sprawling across 750 miles.

In the 2000s, researchers spent a shocking amount of time flying over the range, covering 74,500 miles with ground-penetrating radar, collecting data and mapping mountains.

They say that the range looks a bit like the Alps, and they’ve also detected magnetic anomalies that suggest this hidden mountain range might be made of billion-year-old rock that was lifted into craggy peaks between 250 and 100 million years ago.

For context, that’s when the dinosaurs were still top dog on the planet, and that should also give us hope that the world still has some awesome surprises in store for us. 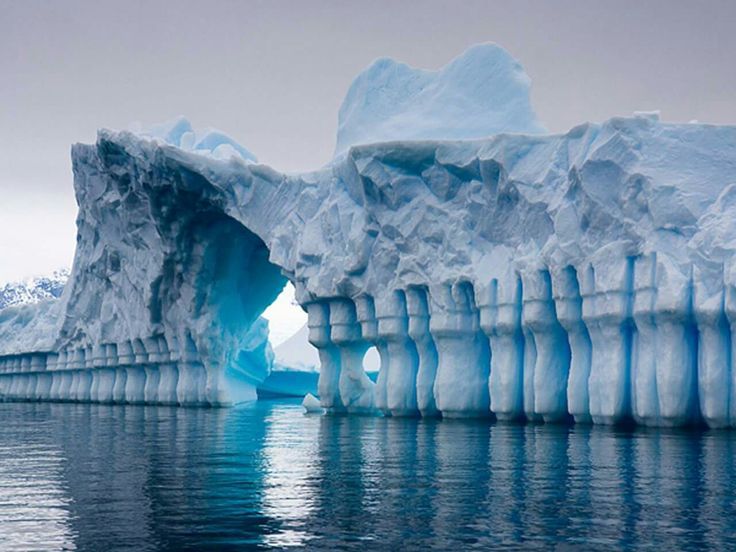 In 2012, Russian scientists drilled through more than 2 miles of ice into something strange buried deep beneath the frozen landscape of Antarctica: the exact opposite of ice. Lake Vostok is the continent’s biggest subglacial lake, which sounds like something that shouldn’t exist.

Even weirder, the research team that pulled samples from the lake found alien life … sort of. According to the BBC, Lake Vostok has existed in complete isolation for millions of years, and when scientists analyzed the samples they found bacteria that was completely unlike the bacteria we’re familiar with.

That sounds like the start of a horror movie about unleashing a plague, but naysayers claimed that the samples were tainted by drilling fluids. The same team drilled again in 2015, according to New Scientist, and the scientific world still wasn’t convinced (presumably because they hadn’t unleashed a plague).

They found another mysterious, alien-esque sort of bacteria, and they still weren’t done. In 2016, New Scientist announced there’s another lake buried under the Antarctic ice sheet, similarly isolated and similarly containing the potential to harbor life forms unlike anything else on Earth. Nothing good ever starts this way.

An entire World War I battlefield 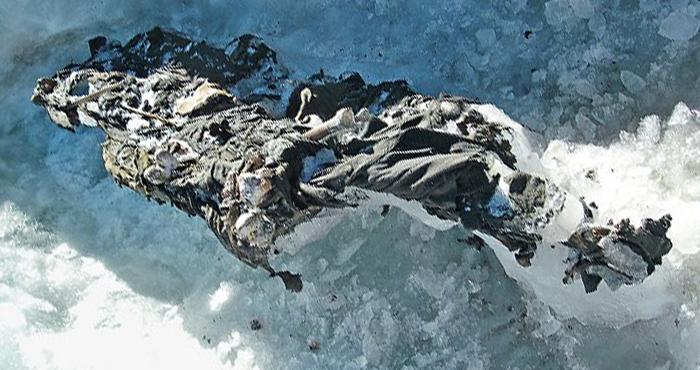 War is an undeniably terrible thing, and every so often, something happens to make it even worse. Beginning in the 1990s, global warming started melting the glaciers around Northern Italy’s town of Peio.

Artifacts from decades before started pouring out of the ice — love letters, diaries, and finally the bodies of soldiers who died fighting in the White War of World War I.

According to The Telegraph, more people died from the extreme cold and the avalanches than from the fighting. Thousands of men – many of them teenagers – perished in the mountains, and their bodies were never recovered.

Until, that is, global warming started revealing the mummified remains. As the melting continues, more bodies are being found. In 2004, a local mountain guide found three Hapsburg soldiers on the mountainside.

Historians have even uncovered an entire cabin preserved beneath the ice, complete with ammo boxes, steel helmets, and clothes left behind by the men who fought in the White War.

Things like half-dismantled engines have been recovered, along with touching personal items like photographs, newspaper clippings, and pieces of trench art. Some of the bodies have even been identified, hopefully bringing a little closure to families who have waited — and wondered — for decades. 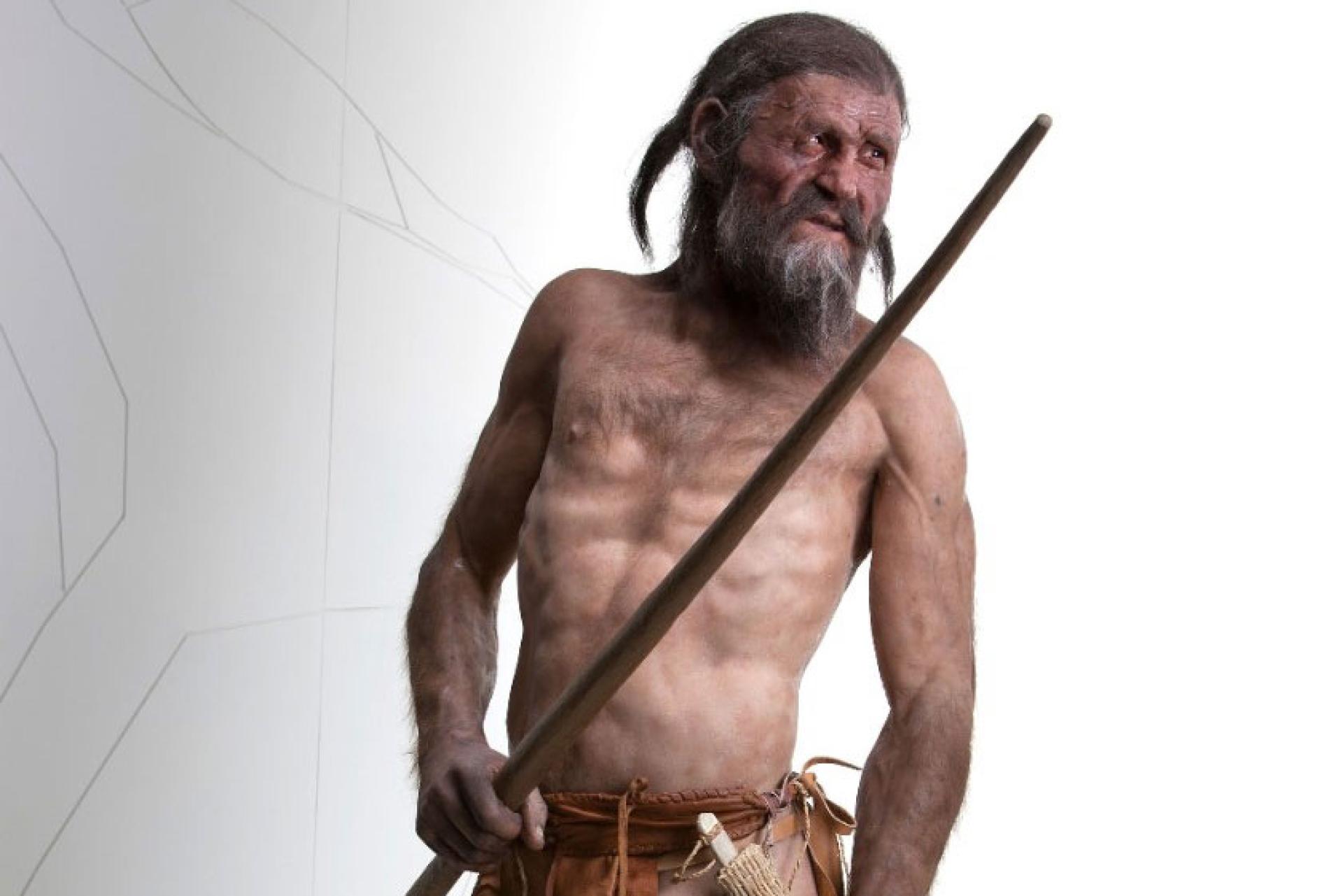 Otzi was discovered by two hikers on holiday, and no matter what cool things happen to you on your vacation, you’re never going to be able to top their story. According to the South Tyrol Museum of Archaeology, Erika and Helmut Simon reported him as the victim of a modern mountaineering accident. We know now that wasn’t even close to the truth.

Otzi has been studied a lot, and National Geographic reported he’s got at least 19 relatives living in the Tyrol area of Austria. We also know he had a tough life — he had advanced gum disease, hardened arteries, gallstones, and high levels of arsenic in his system, and had suffered damage from frostbite. Oh, and he probably had Lyme disease. Ouch.

But most interesting are the findings that show just how much he had in common with us. He had some serious ink and is covered with tattoos believed to be connected to acupuncture.

The Telegraph reported that he liked his souvenirs, too — the ax he carried was from Tuscany, hundreds of miles from where he died.

And according to Gizmodo, research done on the contents of his stomach found that his last meal, ibex, had been dry-cured in a way not unlike the process we use to make bacon. What connects the human race across all times and places? A love for bacon. 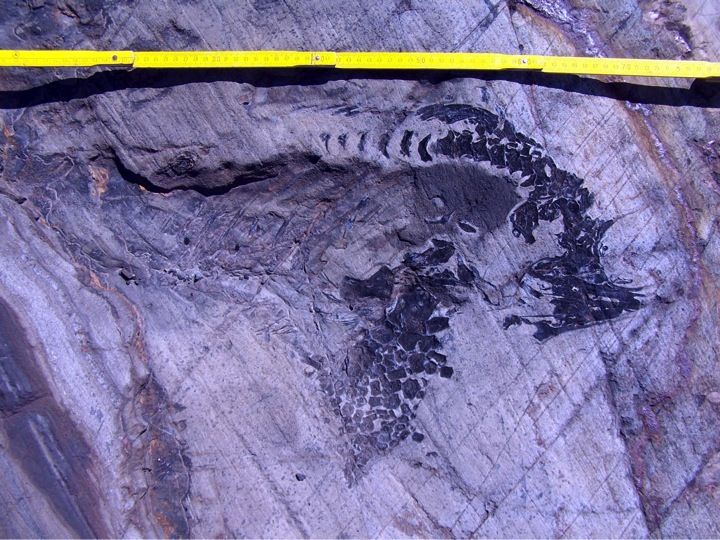 You don’t have to be in elementary school to think dinosaurs are cool — they just are. That’s why we can’t even imagine the excitement of finding a massive, Early Cretaceous-era graveyard perfectly preserved in a Chilean glacier.

According to LiveScience, a group of international researchers headed to the Torres del Paine National Park in Chile to uncover 46 complete specimens of creatures they call ichthyosaurs. (The rest of us just call them fish-lizards.)

The remains date back to between 100 million and 150 million years ago, and they even include soft tissues and embryos. These aren’t small fish, either — the largest skeleton is more than 16 feet long.

The researchers think it was some sort of fairly large accident that buried the fish-lizards first in sediment and then in the glacier, and that the entire group was likely caught in some kind of avalanche.

Even though the fish-lizards co-existed with all your favorite kinds of dinosaurs, they died out first in what scientists describe as a “global depletion of oxygen.” Not even fish-lizards are invincible. 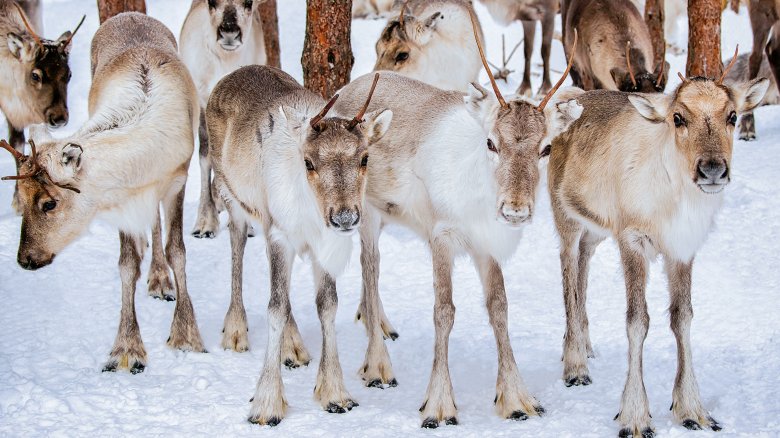 Reindeer are adorable, and that’s why we’re not showing you what was actually, honestly found. (Don’t use your imagination either. Trust us.)

In 2016, global warming struck again when a heat wave led to the thawing of a decades-old reindeer carcass in western Siberia. The body had been infected with anthrax, and according to CNN, the reindeer’s reappearance led to the almost immediate deaths of 1,200 reindeer nearby.

Scientists believe that the reindeer not only fell victim to the infection, but then passed it on to some of the nearly 15,000 people who live a nomadic, reindeer-centric lifestyle that honestly sounds pretty awesome.

Except for the anthrax. According to Vice News, around 40 people were hospitalized with symptoms of anthrax, and this was no minor outbreak. It was the same kind of anthrax that has been weaponized, and the Russian government dispatched specialists in biological warfare to try to contain it.

You’d think this would be another cautionary tale of the dangers of global warming. That particular area of the Arctic saw temperatures of 95 degrees Fahrenheit. (No, that’s not a typo; yes, we’re still talking about Siberia.) We don’t know what else we might find in the melting permafrost, but this movie probably doesn’t end well, either. 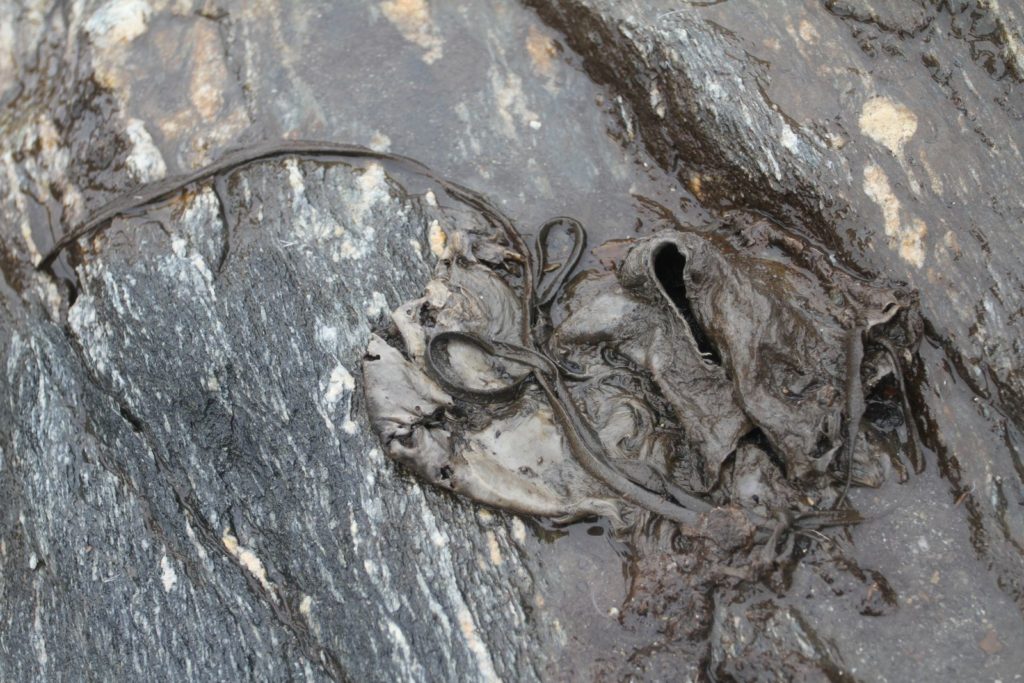 Have you ever found some strange items of clothing discarded along a hiking trail? A shoe, maybe, or a sock? It turns out people have been doing that for generations.

In 2015, Science Nordic reported on an odd phenomenon thanks — again — to global warming. With the melting of Norway’s glaciers, archaeologists are finding things that Iron Age people dropped and couldn’t be bothered to pick up. The mountains of Oppland County have yielded more than 2,000 artifacts alone, which makes it the Iron Age equivalent of the Vegas Strip.

The area is so rich in artifacts because it was once a major thoroughfare for our ancient ancestors. Countless people passed back and forth over the mountains, moving livestock and manning farms with the changes in the seasons.

Most of the artifacts have been things like arrowheads and horseshoes. But scientists have also found mittens, and in 2011 researchers from the University of Oslo and the Norwegian University of Science and Technology found a tunic they dated to between A.D. 230 and A.D. 390.

It was wadded up and covered in equally ancient horse poop, but it’s still told us plenty about ancient textile manufacturing. It also tells us that people have never cared much about littering.

32,000-year-old seeds that were resurrected 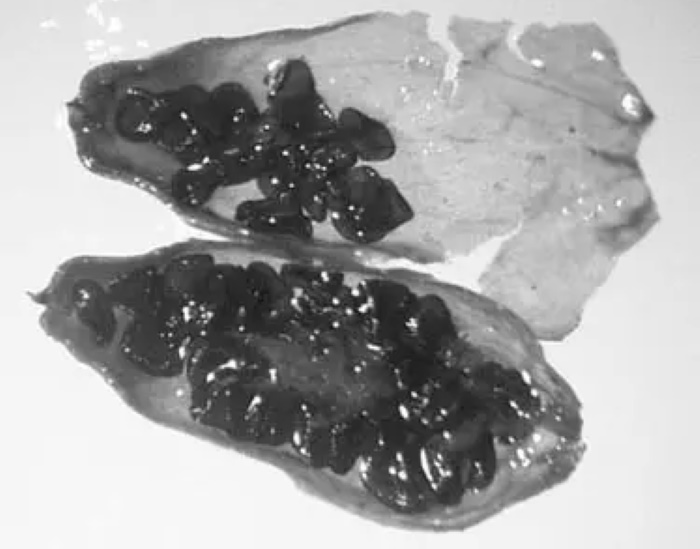 If that’s the case, you’ll find it even more impressive that scientists have managed to grow plants from material taken from 32,000-year-old seeds that had been encased in ice after being hidden by — and we’re not making this up — an ice age squirrel.

You can’t help thinking about the movie, and that’s fine. National Geographic says it was a team of Russian researchers who found the squirrel’s cache of seeds frozen along the Kolyma River, and you can’t help but picture the poor little guy’s disappointment when he found his dinner frozen in the ice.

By the time humans found it, the seeds were 124 feet beneath the permafrost layer, but researchers were still able to recover viable plant tissue from inside the seeds. The seeds germinated and ended up with flowers that produced a whole new crop of seeds. And you can’t even keep a cactus alive. 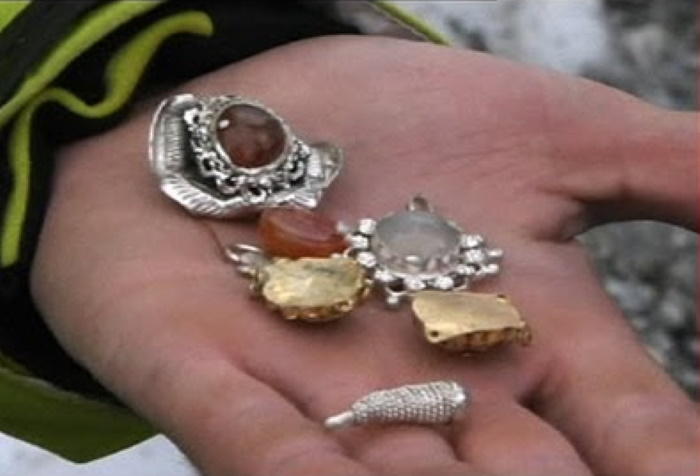 This story probably sounds made up, and if it wasn’t being reported by the BBC, we’d probably think it was a movie pitch. It starts in 2013, when an anonymous mountain climber walked up to some French law enforcement officers and turned over a small box containing 100 precious jewels including rubies, emeralds, and sapphires worth somewhere in the neighborhood of $300,000, give or take.

He’d found it in the ice on Mont Blanc, and we know now the box came from an Air India flight that crashed on the mountain in January 1966.

The crash claimed the lives of 117 passengers, and because of the location — and the weather — the entire thing was never recovered. In the years since the crash, bits and pieces of the wreckage and cargo have been found.

After the overwhelmingly honest climber turned the jewels over the authorities, they began to look for the rightful owner amid a veil of secrecy.

Nothing can be easy, and two different families claimed the box was theirs. Hey, at least the finder has a serious chunk of good karma coming his way, right?

That isn’t the only treasure still on the mountain. In 2014, The Telegraph reported that a French treasure hunter named Daniel Roche found 50 pieces of jewelry that had emerged from the glacier. Ready to become a treasure hunter yet?