(recommend audio) The Black Death, also known as the Pestilence (Pest for short), the Great Plague or the Plague, or less commonly the Black Plague, was one of the most devastating pandemics in human history, resulting in the deaths of an estimated 75 to 200 million people in Eurasia, peaking in Europe from 1347 to 1351.

The bacterium Yersinia pestis, which results in several forms of plague (septicemic, pneumonic and, the most common, bubonic) is believed to have been the cause. The Black Death was the first major European outbreak of plague and the second plague pandemic. The plague created a number of religious, social and economic upheavals, with profound effects on the course of European history.

The Black Death is thought to have originated in the dry plains of Central Asia or East Asia, where it travelled along the Silk Road, reaching Crimea by 1343. From there, it was most likely carried by fleas living on the black rats that traveled on all merchant ships, spreading throughout the Mediterranean Basin and Europe.

Origins of the disease 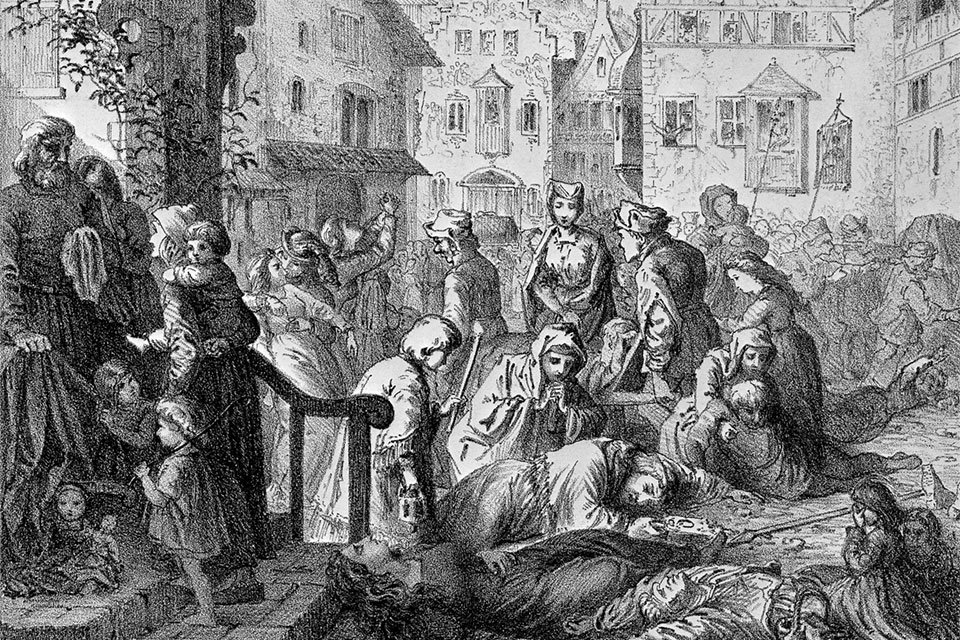 Due to climate change in Asia, rodents began to flee the dried-out grasslands to more populated areas, spreading the disease. Nestorian graves dating to 1338–1339 near Issyk-Kul in Kyrgyzstan have inscriptions referring to plague and are thought by many epidemiologists to mark the outbreak of the epidemic, from which it could easily have spread to China and India. In October 2010, medical geneticists suggested that all three of the great waves of the plague originated in China.

The 13th-century Mongol conquest of China caused a decline in farming and trading. Economic recovery had been observed at the beginning of the fourteenth century. In the 1330s, many natural disasters and plagues led to widespread famine, starting in 1331, with a deadly plague arriving soon after. Epidemics that may have included the plague killed an estimated 25 million Chinese and other Asians during the fifteen years before it reached Constantinople in 1347.

The disease may have travelled along the Silk Road with Mongol armies and traders or it could have arrived via ship. By the end of 1346, reports of plague had reached the seaports of Europe: “India was depopulated, Tartary, Mesopotamia, Syria, Armenia were covered with dead bodies”.

Plague was reportedly first introduced to Europe via Genoese traders from the port city of Kaffa in the Crimea in 1347. During a protracted siege of the city by the Mongol army under Jani Beg, whose army was suffering from the disease, the army catapulted infected corpses over the city walls of Kaffa to infect the inhabitants.

The Genoese traders fled, taking the plague by ship into Sicily and the south of Europe, whence it spread north. Whether or not this hypothesis is accurate, it is clear that several existing conditions such as war, famine, and weather contributed to the severity of the Black Death. Among many other culprits of plague contagiousness malnutrition even if distantly also had an effect as a contributor to such an immense loss in European population since it lead to weakened immune systems. 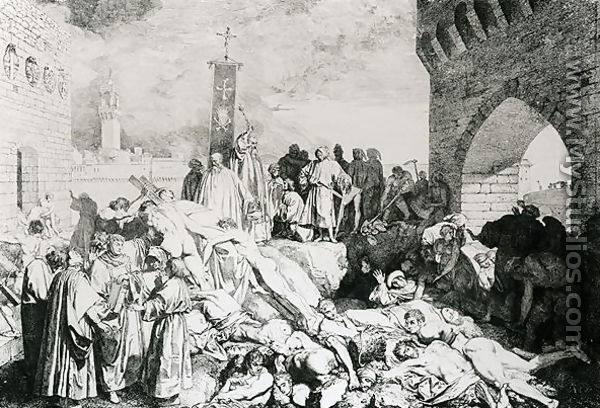 There appear to have been several introductions into Europe. The plague reached Sicily in October 1347, carried by twelve Genoese galleys, and rapidly spread all over the island. Galleys from Kaffa reached Genoa and Venice in January 1348, but it was the outbreak in Pisa a few weeks later that was the entry point to northern Italy. Towards the end of January, one of the galleys expelled from Italy arrived in Marseille.

From Italy, the disease spread northwest across Europe, striking France, Spain (which was hit due to the heat – the epidemic raged in the early weeks of July), Portugal and England by June 1348, then spread east and north through Germany, Scotland and Scandinavia from 1348 to 1350.

It was introduced into Norway in 1349 when a ship landed at Askøy, then spread to Bjørgvin (modern Bergen) and Iceland. Finally, it spread to northwestern Russia in 1351. The plague was somewhat more uncommon in parts of Europe with less developed trade with their neighbours, including the majority of the Basque Country, isolated parts of Belgium and the Netherlands and isolated alpine villages throughout the continent.

According to some epidemiologists, periods of unfavorable weather decimated plague-infected rodent populations and forced their fleas onto alternative hosts, inducing plague outbreaks which often peaked in the hot summers of the Mediterranean, as well as during the cool autumn months of the southern Baltic states.

However, other researchers do not think that the plague ever became endemic in Europe or its rat population. The disease repeatedly wiped out the rodent carriers, so that the fleas died out until a new outbreak from Central Asia repeated the process. The outbreaks have been shown to occur roughly 15 years after a warmer and wetter period in areas where plague is endemic in other species, such as gerbils. 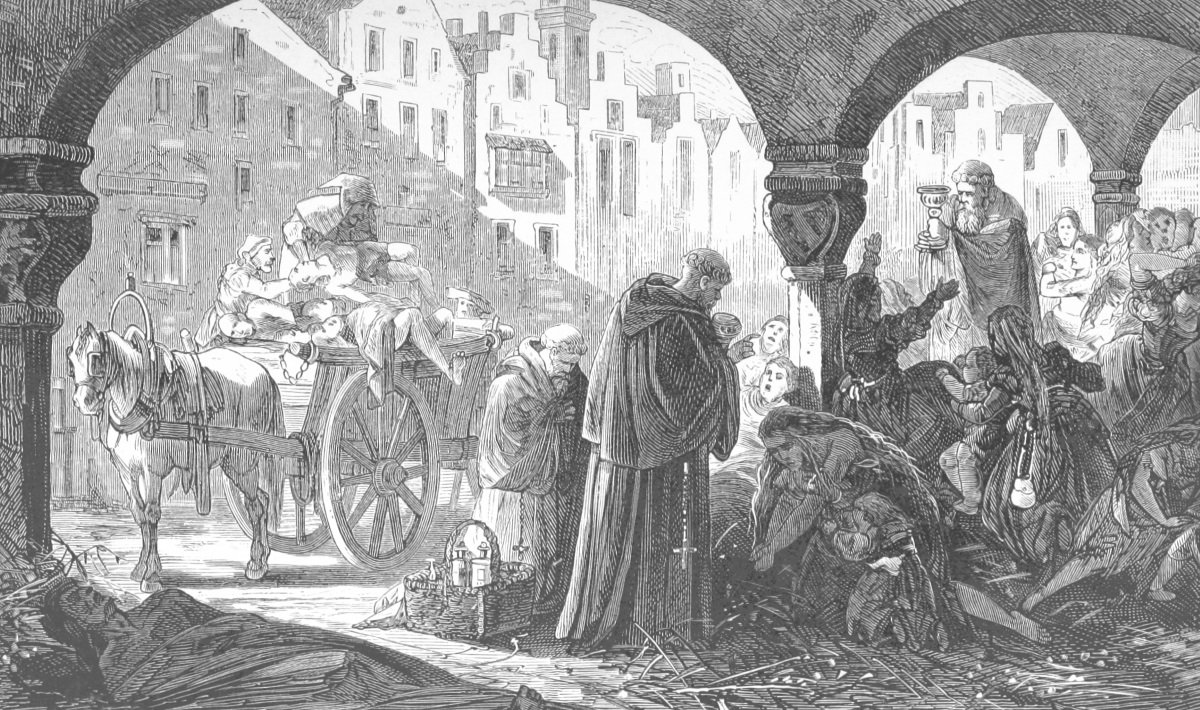 The plague struck various regions in the Middle East during the pandemic, leading to serious depopulation and permanent change in both economic and social structures. It spread from China with the Mongols to a trading post in Crimea, called Kaffa, controlled by the Republic of Genoa.

As infected rodents infected new rodents, the disease spread across the region, including South Africa, entering also from southern Russia. By autumn 1347, the plague reached Alexandria in Egypt, through the port’s trade with Constantinople, and ports on the Black Sea. During 1347, the disease travelled eastward to Gaza, and north along the eastern coast to cities in modern Lebanon, Syria, Israel and Palestine, including Ashkelon, Acre, Jerusalem, Sidon, Damascus, Homs, and Aleppo.

Within two years, the plague had spread throughout the entire Muslim empire from Arabia across North Africa. In 1348–1349, the disease reached Antioch. The city’s residents fled to the north, but most of them ended up dying during the journey.

Mecca became infected in 1349. During the same year, records show the city of Mawsil (Mosul) suffered a massive epidemic, and the city of Baghdad experienced a second round of the disease.

Muslim religious scholars taught that the plague was a “martyrdom and mercy” from God, assuring the believer’s place in paradise. For non-believers, it was a punishment.

Some Muslim doctors cautioned against trying to prevent or treat a disease sent by God. Others adopted many of the same preventive measures and treatments for the plague used by the Europeans. These Muslim doctors also depended on the writings of the ancient Greeks.

How Can We Find Out What's On That Secret Base? 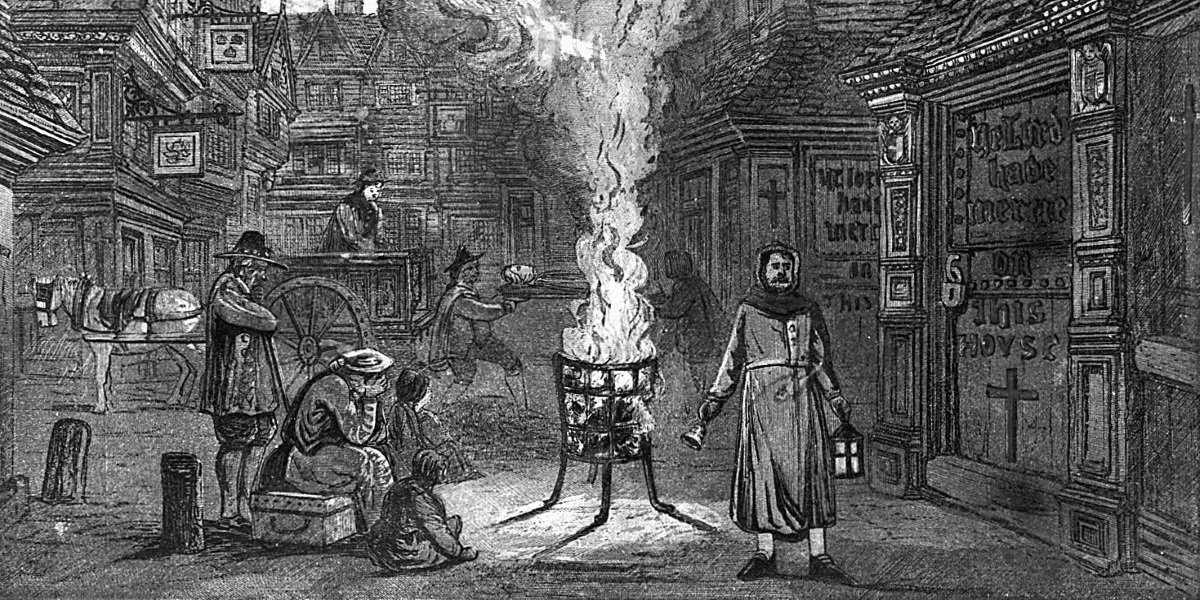 Contemporary accounts of the plague are often varied or imprecise. The most commonly noted symptom was the appearance of buboes (or gavocciolos) in the groin, the neck and armpits.

In men and women alike it first betrayed itself by the emergence of certain tumours in the groin or armpits – some of which grew as large as a common apple, others as an egg.

From the two said parts of the body this deadly gavocciolo soon began to propagate and spread itself in all directions indifferently; after which the form of the malady began to change, black spots or livid making their appearance in many cases on the arm or the thigh or elsewhere, now few and large, now minute and numerous.

As the gavocciolo had been and still was an infallible token of approaching death, such also were these spots on whomsoever they showed themselves.

This was followed by acute fever and vomiting of blood. Most victims died two to seven days after initial infection. Freckle-like spots and rashes, which could have been caused by flea-bites, were identified as another potential sign of the plague.

Some accounts, like that of Lodewijk Heyligen, whose master, the Cardinal Colonna, died of the plague in 1348, noted a distinct form of the disease that infected the lungs and led to respiratory problems and is identified with pneumonic plague.

Modern treatment methods include insecticides, the use of antibiotics and a plague vaccine. It is feared that the plague bacterium could develop drug resistance and again become a major health threat.