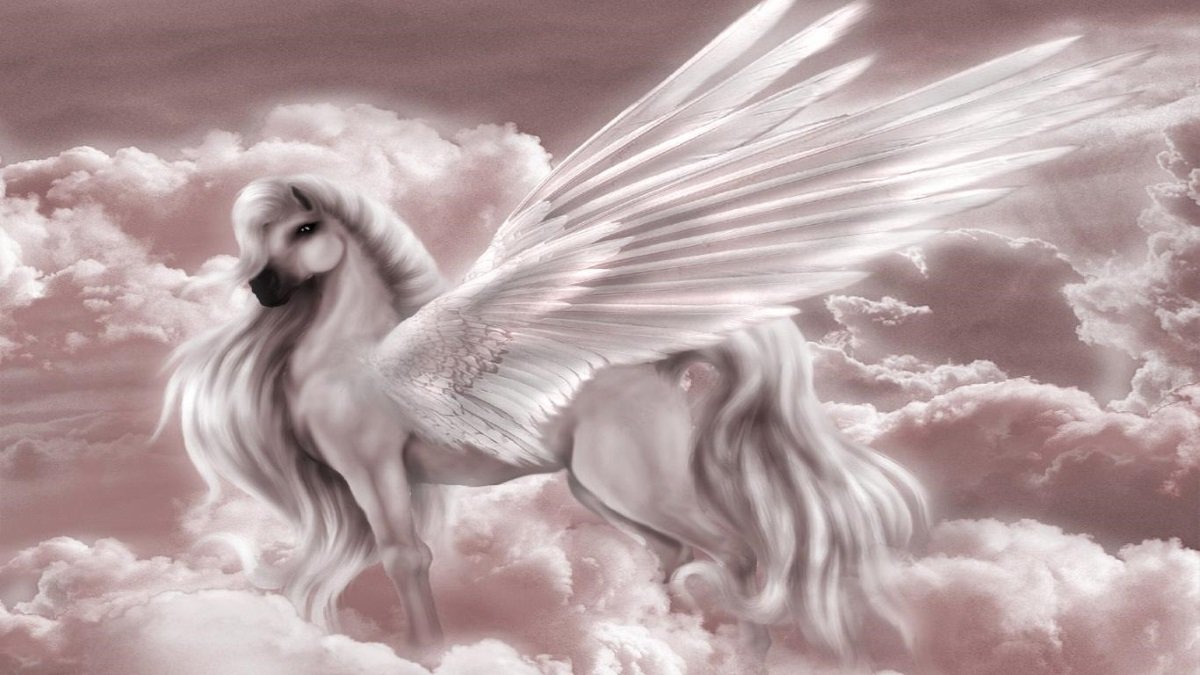 Pegasus is a Mythological Creature described as a beautiful, pure white stallion with wings. He was born from the blood of Medusa. She could turn men into stone should they look into her face, but the hero Perseus decapitated her.

His brother Chrysaor, who was depicted as a human, was born at the same time as Pegasus. They were both sons of Poseidon, the Greek god of the sea.

The moment Pegasus was born he flew to Mount Olympus and lived there for a time.  He placed himself in the service of the Zeus and bore the Zeus thunderbolt. Zeus was the ruler over all the other gods.  Other tales claim that Pegasus served Eos, the goddess of the dawn.

Pegasus is associated with poetry, and in one tale he was tamed by the Goddess Athena and presented to the nine Muses. They represent the arts, including music and poetry. It was said that whenever Pegasus’ hoof struck a place on the earth a spring would bubble up, and this was how he created the fountain Hippocrene to appear on Mount Helicon. This spring became the fountain of the Muses.

Pegasus is also paired with the hero Bellerophon, also a son of Poseidon and therefore Pegasus’ half-brother. Bellerophon wanted to tame the horse for a long time but wasn’t able to catch him. Finally, he went to Corinth and found a soothsayer named Polyidus, who told him to sleep in the temple of Athena. As he slept, Bellerophon dreamt that Athena came to him and offered him a golden bridle, which was actually there beside him when he woke up. Later, he came upon Pegasus as he was drinking from the well. Bellerophon slipped the bridle on the horse and managed to tame him. In other versions, Athena put the bridle on Pegasus and tamed him on Bellerophon’s behalf.

Together, Bellerophon and Pegasus fought the fire-breathing monster Chimera that had a lion’s head, a goat’s body and a serpent’s tail. Pegasus and Bellerophon also fought the fierce tribe called the Solymoi. They were a race of warrior women who lived in Asia Minor and the Amazons. It was a place on the outskirts of the world known to the Greeks.

This list of victories made Bellerophon arrogant, and he decided one day to ride Pegasus to Mount Olympus to take his place among the gods there. This angered Zeus, who sent a gadfly to bite Pegasus. The winged horse shied and Bellerophon fell off. As he was semi-divine the fall didn’t kill him, but he was cursed to wander the earth. In other versions of the story, Pegasus caught on to Bellerophon’s ambition and tossed him off his back himself and continued on to Mount Olympus. In still other versions, Bellerophon simply fell off the horse’s back because he grew faint-headed.

Zeus rewarded the winged stallion for his heroism by placing him among the stars. The Constellation Pegasus is a fairly large constellation that can be seen in the northern and southern hemispheres in August.