Did Archaeologists Dig Up An 800-Year-Old Alien Cell Phone? 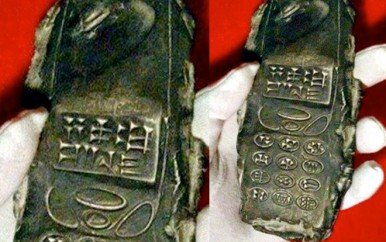 Alien cell phone. On 23 December 2015, the conspiracy theory web site Mysterious Universe published a photo supposedly showing an ancient clay tablet resembling a cell phone which was dug up by archaeologists “earlier this year” in Austria. 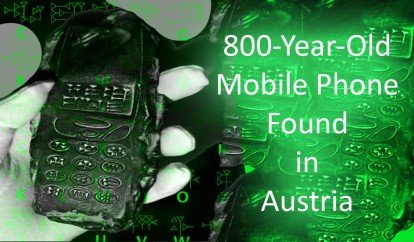 While Mysterious Universe failed to provide the details you’d expect from a possibly world-changing dig, such as the names of the archaeologists, secondary photos of the tablet, comments from the team, the object’s dimensions and so on. The website did however manage to add some wild speculation about the object:

‘A controversial theory proposed by author Zecharia Sitchin is that aliens known as the Anunnaki came from Nibiru (the rumored Planet X beyond Neptune) and created the Sumerian civilization. The tablet looks surprisingly like a modern phone, with the 12 keys, a display and a ‘talk’ button. Could these extraterrestrials have tried to introduce the Sumerians to a phone-like communications device, only to find they weren’t ready for it and dialed them back to a stylus and clay tablets?’

While the theory that this cell phone was created by the alien race Anunnaki from the planet Nibiru, in order to introduce the Sumerian civilization to modern technology, is interesting, this “alien cellphone” was actually created by a German sculptor and is only a few years old.

Karin and Karl Weingärtner of the Art Replik Studio created the clay tablet in January 2012. While the photo was originally shared with a description similar to the one published by Mysterious Universe (Art Replik never mentioned aliens) there are several indications that this post was simply a joke. Such as the title of the object (“BablyoNokia”), comments on the photogrAPH (“Yes, exactly!” in response to “is that my old phone?”), and the fact that the image was watermarked art-replik.com.

The “ancient cellphone” was not discovered by a group of archaeologists in Austria and it was not left behind by aliens. It was created by a German sculptor who specializes in making replicas of ancient art.

Just want to say your article is as astonishing.

The clearness in your post is simply nice and i can assume
you are an expert on this subject. Fine with your permission let me to grab your feed
to keep up to date with forthcoming post. Thanks a million and please continue the enjoyable work.

I’ve been surfing online more than 3 hours today, yet I never found any
interesting article like yours. It is pretty worth enough for me.
In my view, if all website owners and bloggers made good content as you did, the internet will be
a lot more useful than ever before.