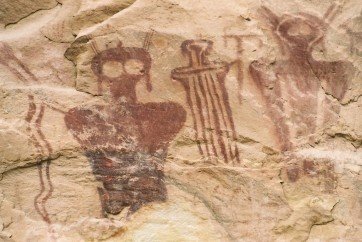 The question about ancient aliens and ufo’s. Unidentified UFO’s and ancient aliens challenged human understandings provoking a quest that continues to this day.

You have to say that UFO evidences goes back as far as man has left any records at all, because even in ancient cave arts 20,000 years ago or so in France or Spain there are objects, drawings that look like modern flying saucers. So you have to go that far, if you want to start some point of time when UFO was recorded.

Forever frozen in silence & in stones, these proactive drawings raise questions which are debated to this day, for some shapes represents Gods or Ancestors Spirits but for others they are ancient depictions of space crafts, ancient aliens.

Text from the world’s earliest civilization including Sumeria, some 5000 years ago mentions strange Ariel phenomena & laser beams who control them. These are ancient records in which people describe different kind of flying objects, which they have seen.

In some cases people were describing what they understood to be flying vehicles manned by different category of living beings; there are written accounts which describes in very details. The images and drawings on those caves are proactive & controversial.

A drawing of Alien makes it hard to understand if it was drawn by the live view, people back in those ages had or if it was merely an imagination of science fiction writers of those times.

Despite increasing the public support for the notion that UFO’s may have been visiting the Earth since the dawn of the history, the scientific community is overwhelmingly skeptical about the object.

Ancient people saw weird things in a sky and they were convinced that those are the symbols of the God’s intentions, there minds were controlled by the God’s and in every case there is alternative explanation.

It could have been some lightening or atmosphere change or anything that was unknown to primitive men, so they always interpret these things as supernatural.

Despite Scientific skepticism, the annals of human affairs contain many examples of strange objects seen in the sky. One of the earliest written records of the encountered with the UFO comes from Egypt more then 3500 years ago.

There is a story about three Egyptian Ferro, who saw circles of Fire in the sky, started with one and report says that after few days there were many of them in the sky, and they were so impressed that it was recorded on the papyrus and considered as very momentous.

“In the year 22, on the third month of winter, a circle of fire appeared in the sky after some days it become very light, shown to the brightness of the sun, extended to the limits of heavens”
–The record of Ferro Papyrus – 1480 BC

Century’s later during the invasion of Asia, the might Greek leader “Alexander the Great” is chronicled to having witnessed UFO’s.

“While crossing a river in 329 BC, Alexander and his men’s discovered what he described as gleaming silver shields in the sky, the objects repeatedly swooped out on a column of soldiers scattering men’s & horses in panic”.

Seven years later, while attacking the Phoenician city of tyre, in the Eastern Mediterranean, Alexander again encountered UFO’s recorded by the observations of the both sides of conflict.

One of the object suddenly shoots a beam of light at the city’s wall, crumbling in to dust, allowing Alexander’s troops to easily breach the defenses & takes over the city.

The Passage of centuries leaves with us little proofs of whether the events really took place or merely the product of imaginative minds.

With havin so much content and articles do you ever run into any issues of
plagorism or copyright violation? My blog has a lot of exclusive content I’ve either
written myself or outsourced but it seems a lot of
it is popping it up all over the internet without my agreement.
Do you know any techniques to help protect against content from being stolen? I’d really
appreciate it.